The second MP Open call of the Open European Dialogue (OED) that took place on 2 November saw a return to the topic of the Covid-19 pandemic. The Open Call highlighted that this topic remains the most important item on most policymakers’ agendas, and is over time assuming more nuancing and depth.

After a quick check-in on current measures to curb the spread of the virus, the conversation moved into specific challenges of policymaking during the pandemic.

The most prominent topic was the connection between constituents and policymakers. One participant expressed his distress at the amount of people believing fake news and falsehoods about the virus that they find on the internet. This has led to widespread protests of small but increasingly radical groups of skeptics who believe that the virus is either a hoax or a conspiracy.

The parliamentarians on the call also conceded that the often confusing distribution of policymaking competences, the at times contradicting results of the latest scientific insights, and the complicated distinction between essential and non-essential businesses can lead to an erosion of trust even among those who initially supported government measures.

This was viewed as particularly challenging as they assumed that the pandemic situation would last for 2-4 years, based on expert conversations that they had had, and lasting political support is key in maintaining crisis control during this time.

Finally, the participants were acutely worried about a spike in numbers as their constituencies’ health authorities were struggling to keep up with contact tracing.

In spite of the difficulties described here, there was also a shared feeling of responsibility and optimism as the participants agreed that even though this is “the hour of the executive”, parliamentarians had more than enough to do being the first point of contact for insecure or concerned citizens, and helping with the implementation of nation-wide measures in their constituency.

In response to the participants’ support request, the OED team has compiled research on the state of the crisis, protest phenomena, and best policy practices, which can be accessed in the publication found below.

To give OED members a chance to discuss the connection between voters and representatives in more depth, the OED organized a follow-up event on the topic of “Connection lost? Managing the relationship between policymakers and citizens in times of crisis and beyond.” This conversation took place within the framework of the Organization for Economic Co-operation and Development’s (OECD) “Government after Shock” global dialogue on 17 November 2020. To learn more about these events, see below. 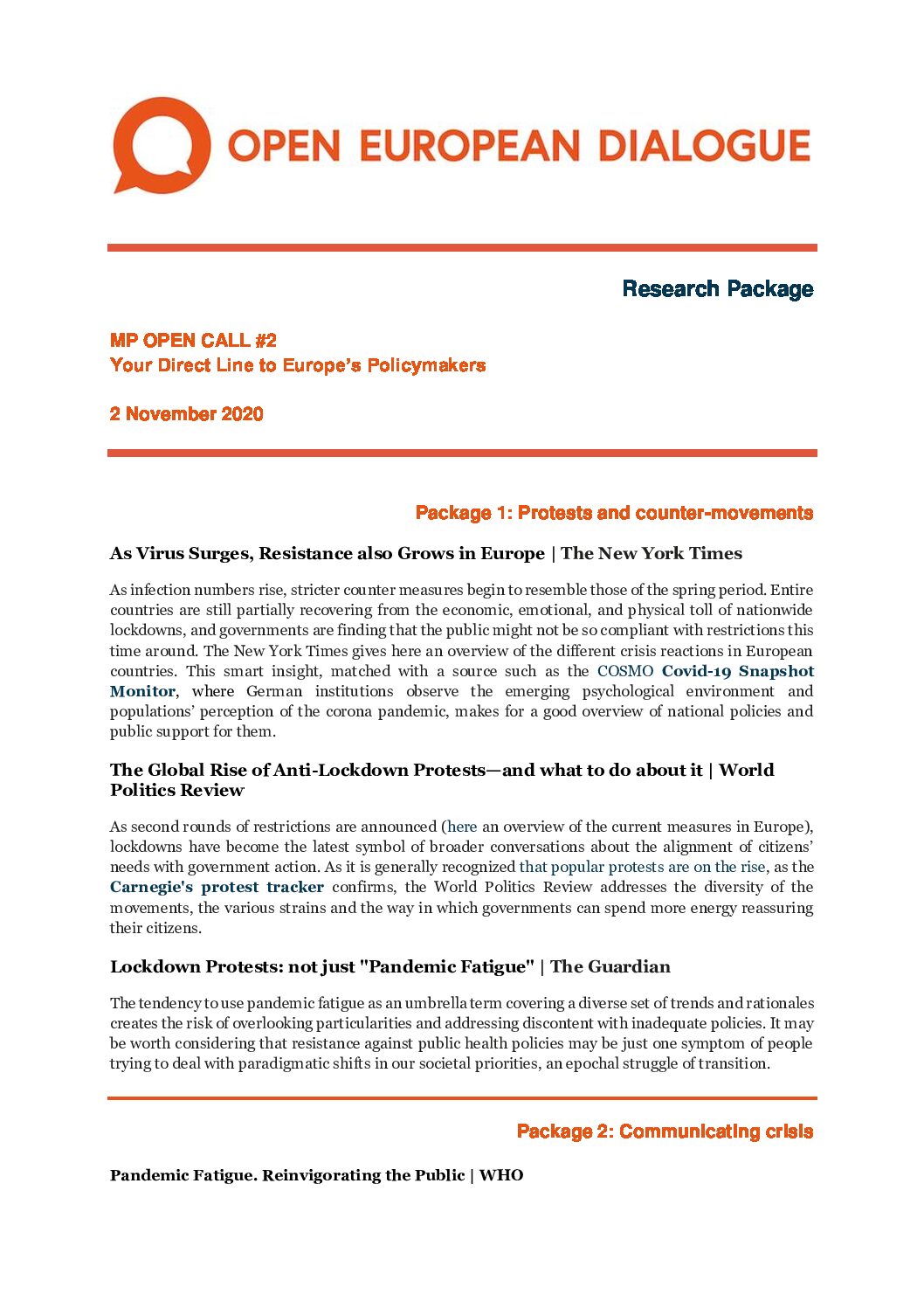 MP Open Call #2
Research package for policymakers
Download PDF
BECOME A PART OF OUR NETWORK.
If you are a member of parliament in Europe and are interested in joining our network, please fill out this form and we will get back to you.
Please fill in all required fields.
We use cookies on our website to give you the most relevant experience by remembering your preferences and repeat visits. By continuing, you consent to the use of cookies.
OK
Manage consent